In this post I will discuss the does size really matter game to find out your project is in trouble. This game can be done from the moment the project initiative document (PID) is discussed in the project board. In a way this is an early early warning sign. In this post project size is based on:
– project budget
– project duration

For most project managers project size really matters; the bigger the better. You can also see this reflected in certification levels for project manager like IPMA. But digging into research on project failing the project budget, duration correlate with failure. I found an article with the nice title:”Double Whammy: How ICT Projects are Fooled by Randomness and Screwed by Political Intent” by Alexander Budzier and Bent Flyvbjerg. The study analyzed 1471 large-scale global IT projects costing more than $170m. The findings where one in six big IT projects go over-budget by an average of 200%. An average IT project has a budget overrun of 27% and a schedule overrun of 55 %. The chaos report (2009) from the Standish Group reports 32 % of IT projects are successful, 44% are challenged and 24 % fail. Small projects (< 500 $) are more successful and big projects tend to fail more. None over 10 M $ are successful. Chris Verhoef investigated investment decision making in 600 project. He found out development cost tend to exponentially grow depending on the duration of the project. 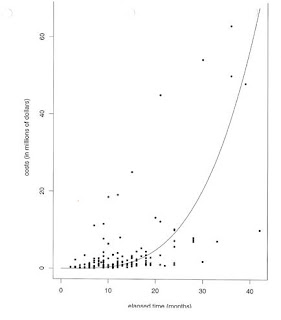 He deducted a simple formula to check if the projected development cost makes sense:

The formula for development cost in fact confirms the findings of the Chaos Report. Small project are more successful then big projects. The effects off budget overruns for development on the Total Cost of Ownership have a multiplier effect. Development Cost are 20 % of the Total Cost of Ownership. There are examples of organizations who have learned this lesson. In the Netherlands the Laures Group (supermarkets) got into serious problems because of the failing of an IT project (and other issues). The Laures Group had to sell supermarkets to survive.